I have a confession to make, I have a “thing” for a two-stroke Yamaha, I love them!  I guess it goes back to my younger days when I was just starting out with motorcycles in the early 70s.  My first dirt bike was a Yamaha 175cc CT-2.  The following year I “graduated” up to a DT-3, of course that wasn’t enough for me, I’m sure I had more than one wet dream about tearing up the dirt on a YZ 250, or SC 500.  Yamaha’s off road line was not my only interest, the RD models were a point my motolust as well.  I remember one RD 400 I wanted very badly, it was hopped up with high compression radial heads, port work, open expansion chambers and clubman bars, it was hot!  To this day I still wish I had one.

I think I have found a kindred spirit in Julian Farnam, creator of our featured RZ 350.   Julian has been riding Yamaha two-stroke twins since the age of sixteen so the RD/RZ model line is a familiar old friend.  I first became aware of Julian when I was writing my article on the Dirtbag challenge and discovered his entry, a heavily modified RD400 street fighter with a leading link front end.  I was blown away!  It was so well thought out, and beautifully made, I had to learn more about the builder and his machine.  During our communications Julian shared his Flicker account, that’s when I discovered this wonderful piece of mobile art.

At first I didn’t know what I was looking at, was this a pre-production prototype that Yamaha had built?  It was as well finished as anything coming from the factory, but that couldn’t be, unless they are put into production, prototypes are usually destroyed.  Maybe this was an escapee from the Yamaha R&D crusher?  I love a good mystery so I kept digging, a little further into his images I found the truth, this was a one-off, proof of concept design and build by Julian.  If I was “blown away” by the RD 400, this had me gobsmacked! 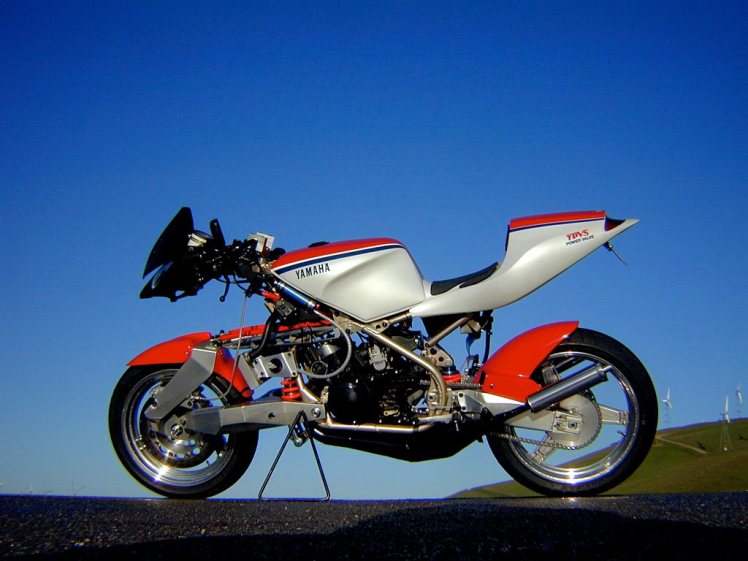 In the world of motorcycles we have many “custom” bike builders, most are pretty good, but I wonder if they could do this?  Your typical builder does some fabrication, adds in a few after market parts, trick paint, chrome, and calls it a “custom build,” that’s not what this is, this is a ground-up fully engineered creation.  The only parts that are Yamaha on this bike are the engine, part of the swing arm, and gas tank.  Everything else is Julian’s, it was either a component he made, modified, or commissioned to have made.  This is a truly unique, one of a kind custom.

You might have noticed the RZ has something interesting going on with the front end, no front forks.  The front suspension was the entire point of this build.  Alternative suspensions using something other than telescopic forks is nothing new, designers and engineers have been hacking at this for decades.  The earliest example that comes to mind is the 1922 Neracar with hub-center steering.  If you’ve never heard of it before it’s not surprising, only 16,500 were ever built.  It was an odd looking thing, but it had features we now take for granted on a motorcycle, a perimeter frame and five speed transmission.  Ahead of its time, and a bit of a “ugly ducking,” production ended in 1927.  Later in the same century other motorcycle manufacturers tried their hand at producing forkless designs.  All of them had limited success except the BMW Telelever which is still used today, but is not a pure forkless design.  The reason for the lack of success with the other designs can be attributed to mainly one area, a feeling of vagueness in the steering.  Some designs worked better than others, but none gave the same feedback as telescopic forks.  The idea of developing a design that overcame the vagueness and gave the same feel as conventional forks appealed to Julian, so he decided to give it a try.

This is a build with a time scale measured in years, not weeks or months, but that’s how it is when you try to crack a problem that has been around a while.  The project began in the early 90s right after Julian left college.  At the time he was working on his own with limited resources.  This was prior to the easy availability of CAD software, all of the calculations for the design, such as the suspension geometry had to be done by hand.  It was no easy task, it took Julian two months working trig equations in Excel just to calculate the geometry of the swing arm and linkages.  Editor’s Note:  Honestly, the technical side of this makes my head hurt, so I’m not going to dive in deep here.  For those of you wanting to geek out on the tech, I’ll provide a link at the end of the article.  There are plenty of hand made items, some of them quite labor intensive,  Julian spent over a month building the forms necessary to cast parts of the swing arm.  Knowing the time that went into the creation of just the swing arm and suspension makes it easy to understand why this project took years.

I’m a serious gear head, to me checking out the parts that make up the whole are just as enjoyable as looking at a completed bike.  I was very pleased to find not only images of Julian’s finished build, but component shots as well, cool!  Julian had blown the RZ apart for painting after the test runs at Sears Point Raceway, and fortunately for us, made photographs as he went.

Once the gas tank is removed, it is easy to see the layout of the forkless steering.  This is such a simple, but elegant design.  The top link rods (in red) run from the underside of the steering head to a pivot point mounted mid-frame, from there the steering motion is transferred to the lower rods (also red) connected to the steering upright.  At the rod ends are adjustable heim joints.  The adjustability  allows all of the play in the system to be removed, making for precise steering.  Editor’s Note:  In the UK the Limeys call the heim joint a rose joint, both “heim,” and “rose” relate to the manufacturer’s names, the design is actually German in origin.

An interesting feature, besides the forkless design is the front brake, it has dual floating rotors pinched by a custom Performance Machine three pad single caliper.  The dual rotors give the RZ the same stopping power a conventional sport bike with telescopic forks.  The front wheel is custom made by Kosman with an offset center to accommodate the steering/brake hub.

The Performance Machine caliper is basically one of their standard calipers with a section added to make room for the center brake pad.  The two outside pads push in toward a double sided center pad.

Each piece of the front end is a work of art in its own right, so well finished.

The steering upright is complex, a mix of cast and machined pieces TIG welded together.

Made to mimic the look of FZR rear swing arm, the front was the most difficult piece to create, made of multiple TIG welded castings, it is a beauty to behold.

I think that’s enough of looking at the individual components, let’s check out the completed bike again.

In the beginning of this article I called Julian’s creation “mobile art,” and, like all art, it will have its critics.  Some might say that it looks incomplete without some type of front cowling bodywork connecting the head light nacelle.  Maybe, but if I had just spent several years developing a unique design, I’d want to show it off, besides, the components are beautiful, it would be a shame to hide them.  And of course the people who prefer their motorcycles with front forks might say it looks odd, but the handling improvement over telescopic forks is undeniable.  During practice laps at Button Willow Raceway his forkless design RZ set lap times that would have resulted in a podium finish for the class.  That certainly proves it equal to, if not better than a conventional forked design.

Will we ever see Julian’s design picked up by mainstream manufacturers?  I would hope so, but most likely not.  Why?  Because they like to build motorcycles that sell, and us motofolk are a hidebound lot, we like “tradition.”  If you don’t think tradition has an influence on what is produced, there’s Harley, still chugging along with their 45 degree V-Twin, or the new Indian Chief, and the Triumph Bonneville, all are very classic in configuration.  The bottom line, tradition sells, and tradition demands front forks.  Even BMW’s technologically superior Telelever system is hidden behind something resembling front forks.  It seems we want the technology, ABS, traction control, etc., just wrap it in old school looks.

Art, or not, the RZ is decidedly not mainstream, and it certainly is unique.  Julian has a lot to be proud of with his creation, its fit and finish is excellent, and the engineering of his pure forkless design solves the problems even the big boys couldn’t crack.  I would say that Julian’s design and build of this motorcycle could be considered the achievement of a lifetime.  Great job Julian!